Rounding Up The Ranches

Landscapes from the Past

The John Froom Ranch on Los Osos Valley Road in San Luis Obispo, was one of over 50 ranches the San Luis Coastal Unified Adult School Thursday Loaction Painting Class was visited between 1973 and 1986. Bill Froom, owner of the ranch, said the round barn was the only one of its kind in San Luis Obispo County. Bill’s father, John, ‘bunked’ in the creamery for 17 years (in front of the round barn).

Pigs were kept in the middle field and chickens wandered around the coop in the foreground. Bill enjoyed giving Cal Poly students tours of the ranch for many years.
$40.00 Plus shipping, handling and tax. 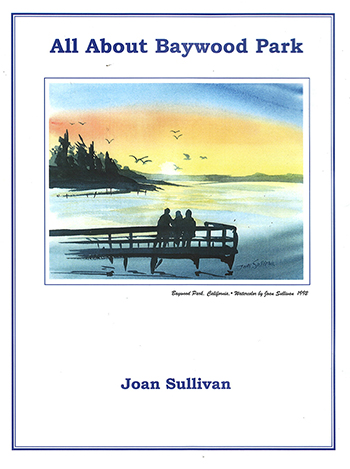 All About Baywood Park

The Town of El Moro was plotted in 1889 by a group who hoped the Southern Pacific Railroad would bypass Cuesta Grade and route the line along the coast. Even a ‘Hotel Reserve’ was marked off on a map where Baywood Elementary School is located, but nothing came of the original promoters great plans. http://joansullivan.com/wp-admin/post.php?post=43&action=edit#
Not until Walter Redfield, realtor, decided to purchase three thousand lots in 1919 from his employer E. G. Lewis, founder of Atascadero, did the area take root. Redfield sold his lots by advertising: $1.00 DOWN – ONE DOLLAR PER MONTH BUYS THIS LOT
Plans for Redfield Acres included a Country Club, Golf Course, and Riding Stables and he advertised throughout California. He would drive his 13 passenger Cadillac to Taft and Bakersfield. Then he would transport prospective customers back to Redfield Acres, entertaining them by taking them fishing, hunting, swimming and boating, while Pansy, his wife, served sumptuous meals.
Richard Otto came on the scene in 1920, and with financial aid from his father, purchased 1,000 lots from Redfield. He thought Town of El Moro sounded too much like Morro Bay and named his town Baywood Park. He widened the streets, planted trees, built a pier, kept a boat ramp and attempted to dredge the bay. He advertised in his newspaper Baywood Park Observer, and ‘sporadically’ published Baywood Park Estates pamphlet.
County residents referred to the coastal area as Baywood Park in the 1930s and 40s. The U.S. Post Office was on Second Street, until 1972. It was moved several times before locating at its present site, and renamed Los Osos by public choice.
$20.00 Plus shipping, handling and tax. 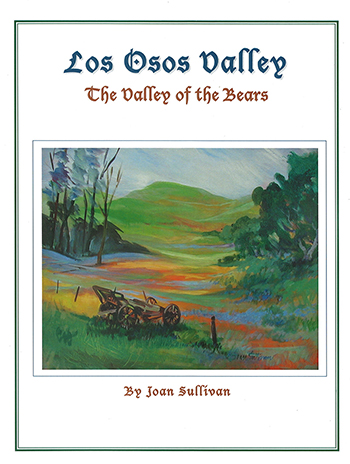 The Valley of the Bears
The history of Los Osos Valley is a well documented saga of adventure and romance of the old West beginning with Captain Gaspar de Portola’s trek into Alta California in 1769
Captain Portola’s soldiers named the valley, (Canada de Los Osos) valley of the bears, when they came upon troops of bear digging for roots.
California’s greatest grizzly bear hunt took place in Los Osos Valley. When supply ships failed to come to the aid of two early missions, Lt. Fages and his soldiers returned to Los Osos Valley to hunt the bear for food. The hunt was successful and dried bear meat helped save the missionaries from starvation at the Monterey Presidio and Mission San Antonio de Padua.
When the Mission’s vast lands were secularized – transferred from the Catholic Church and opened up to the public by the Mexican government, Rancho Canada de Los Osos y Pecho Y Islay, was granted to Captain John (Juan) Wilson and his partner Scott Diego, September 24, 1845. Bordering Rancho del Chorro to the north, the 32,000 acre ranch covered the area from San Luis Obispo westward to present day Montana de Oro. Rancho was later granted to Captain Wilson and his partner, October 10, 1845.
Captain Wilson, sea-captain turned ranchero, married Ramona Carillo Pacheco, a widow with two sons, Mariano and Romualdo. Captain Wilson raised his two step sons along with his four other children. Romualdo, his step son, later became the first native son Governor of California in 1853.
The Wilson family lived in the two story 90 foot Wilson Adobe that was built in the early 1800s by the missionaries it is believed.
Captain Wilson’s love story and the lifestyle of the family is only one story of the many remaining to be told in the living history of Los Osos Valley.
$20.00 Plus shipping, handling and tax.

This site is under construction. Please check back in a couple of days for new updates and products.